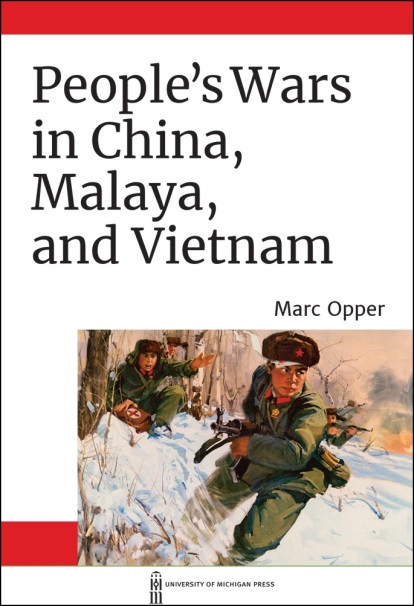 True victory against insurgents means destroying their military capabilities and political influence. Despite devoting considerable resources and firepower to that mission, few governments manage to achieve the latter. Rebellion is a perennial struggle that cuts through the societies of the world’s “bottom billion.” To understand the causes of counterinsurgency success is therefore to understand one early and fundamental step in the process of building stable, peaceful, and prosperous societies.

In People’s Wars in China, Malaya, and Vietnam, I argue that ultimate victory in civil wars rests on the size of the coalition of social groups established by each side during the conflict. I argue that when insurgents establish broad social coalitions (relative to the incumbent), their movement will persist even when military defeats lead to loss of control of territory because they enjoy the support of the civilian population and civilians will not defect to the incumbent. By contrast, when insurgents establish narrow coalitions, civilian compliance is solely a product of coercion. Where insurgents implement such governing strategies, battlefield defeats translate into political defeats and bring about a collapse of the insurgency because civilians defect to the incumbent.

People’s Wars supports this argument through the use of six case studies that examine some of the 20th century’s most consequential insurgencies. The core of the book consists of an analysis of four periods of the CCP insurgency based on an unprecedented amount of primary source evidence. Two additional case studies, also based on primary source materials, examine the Malayan Emergency (1948-1960) and the Vietnam War (1960-1975).

People’s Wars makes four important contributions to the study of civil wars and insurgencies. First, it develops a theory of conflict outcomes that explicates the independent and joint effects of military and political strategies in civil wars. Existing scholarship focuses on either the military or political dimensions of internal conflict, but has not fully theorized how each contributes to conflict outcomes. More importantly, People’s Wars shows that insurgencies are political conflicts and that the size of insurgent’s social coalitions determines the extent of compliance from civilians.

A second contribution is the conceptualization of the relationship between civilians and insurgents. Recent work on insurgent institutions and civilian behavior in wartime has shifted focus from active, voluntary civilian support to conditional compliance civilians provide to governing institutions. People’s Wars builds upon and expands these insights by conceptualizing levels of civilian compliance as varying based on the composition of insurgent’s social coalitions. Groups included in insurgent’s coalitions provide compliance because they benefit from insurgent’s governance programs, while groups excluded from the insurgent’s coalition provide compliance only with the application of coercion. People’s Wars breaks new ground in theorizing how compliance and coercion operate in areas both under insurgent control and in contested areas.

Third, the case studies in People’s Wars make important substantive and methodological contributions to the comparative study of civil wars and insurgencies. The Chinese Communist Party is generally held up as the archetype of a successful insurgent organization. Even studies of conflicts far-removed from China routinely reference the CCP and the writings of Mao Zedong. People’s Wars is the first study to systematically integrate the CCP’s insurgency into the comparative analysis of civil wars, the first study to examine the CCP insurgency from its beginning in southern China in the 1920s to its conclusion in northern China in the 1940s, as well as the first work to compare and contrast the China case to the conflicts in Malaya and Vietnam. Methodologically, examining both successful and failed insurgencies provides significant leverage in explaining why insurgents succeeded in some conflicts but not in others. Furthermore, rather than aggregate at the national level, the China case studies undertake a systematic comparison of two subnational regions, resulting in a more rigorous test of the framework and a more robust explanation for conflict outcomes while doing justice to the inherent nuance of the areas under study.

A fourth contribution of the book is its extensive use of primary source material. The four case studies on China are based on Chinese-language primary and archival sources, many of which have been previously unavailable, overlooked, or under-utilized. These materials provide an immense amount of detail on the social, political, and economic aspects of the conflict and allow for a thorough testing of the book’s argument. The Malayan Communist Party (MCP) was predominantly made up of ethnic Chinese Malayans and the conflict itself was fought for the loyalty of Malaya’s ethnic Chinese population. People’s Wars is the first study of the Emergency to make use of Chinese-language sources from the MCP and the Chinese-language press in Malaya to analyze the conflict, shedding new light on the insurgents and the reaction of civilians to both the MCP and the incumbent government.

Lai Teck was the leader of the Malayan Communist Party (MCP) from 1939 to 1947. He was arguably the MCP’s most important leader, transforming the Party from a small clandestine organization focused on labor agitation to a streamlined Marxist-Leninist Party. Under his direction, the MCP came to an agreement with the British to cooperate against the Japanese as the latter prepared to invade Malaya, and overseeing the creation of the MCP’s military, the Malayan People’s Anti-Japanese Army (MPAJA), during the Second World War. But Lai Teck was not a run-of-the-mill communist leader. Of Vietnamese origin, Lai Teck began his political career in the Indochina Communist Party before becoming an agent for the French. When his cover was blown, he was adeptly inserted into the MCP by British intelligence in the mid-1930s. When the Japanese took control of Malaya in 1942, Lai Teck switched allegiance, helping them locate and eliminate crucial parts of the MCP organization. When the British returned to Malaya, Lai Teck once again resumed his role as a British spy. When other members of the Party became suspicious of him, Lai Teck fled, with British assistance, to Hong Kong and then to Bangkok, where his luck ran out and he was killed by Thai communists in late 1947.

This book examines the life of Lai Teck by utilizing extensive primary and secondary source material in Chinese, English, French, Japanese, Russian, and Vietnamese. The materials run the gamut from government documents to academic studies to memoirs to internal MCP and CCP documents. The book also includes materials based on interviews with former members of the MCP, including some of the last living people who personally knew Lai Teck. The result is the most complete portrait of the Lai Teck ever written, including details on his early life, education, personal life, leadership abilities, interaction with members of the MCP and British intelligence, linguistic abilities, and ideological inclinations. The book represents an important advance in the history of the MCP, demonstrates the great benefits of interdisciplinary research, and shows how primary and secondary sources can be used to build profiles for both insurgent leaders and insurgent organizations.

This project serves as the basis for Ho Tzu Nyen’s “The Mysterious Lai Teck,” a performance art piece that makes use of animatronic puppetry, shadow play, projections, and music to tell the story of Lai Teck and to consider broader themes of history in Southeast Asia, the nature of espionage, and the tenuous nature of historical narrative. The piece premiered in Hamburg at the Kampnagel International Summer Festival 2018 (program brochure), appeared in Seoul at the National Museum of Modern and Contemporary Art (program brochure), at the International Performing Arts Meeting in Yokohama in February 2019, is currently showing at Beijing’s Red Brick Art Museum as part of the “Rituals of Signs and Metamorphosis” (Yili, zhao yu yi 儀禮 · 兆與易) exhibit (English/中文) through April 7, will appear in May 2019 at the Singapore International Festival of Arts, and will later tour throughout 2019 at various venues in East Asia, Europe, and Southeast Asia.

This edited book examines revolutionary left-wing ideology in Southeast Asia during the 20th century. It brings together in one place works that analyze the ideology of left-wing revolutionary parties in Southeast Asia in both historical and comparative perspective. Though enormous strides in understanding the etiology, processes, and outcomes of conflicts in Southeast Asia during the Cold War, the focus of such analyses has heretofore been overwhelmingly on the material aspects of the conflict (force sizes, battlefield tactics, the international environment, etc.). While left wing ideologies are not themselves material, prevailing conceptions of them as readily-available blueprints for “organizational weapons” comes perilously close to rendering them as such. These ideologies are often variously described as (1) part of an international communist conspiracy, (2) as the rantings of madmen, and/or (3) not existing at all and acting as a post hoc justification for violence. This book breaks from previous depictions of ideology and presents them as integrated systems of political thought that provided revolutionary parties with a means by which they could understand the political environment, identify friends and foes, prescribe action, and lay out the final goals of the struggle.

At present, the book will include chapters on Cambodia, Indonesia, Malaya/Singapore, the Philippines, Thailand, and Vietnam (with more planned) in which area specialists utilize primary sources composed in the language of the countries in question to show how Southeast Asian communists understood and indigenized communist ideology. My chapter in that volume presents the first systematic analysis of the Malayan Communist Party’s ideology and examines it in both historical and comparative perspective.

From the late 1940s onward, high-ranking members of the Malayan Communist Party (MCP) found their way to Beijing to recover from wounds they sustained on the battlefield and, later, to serve as MCP representatives to the CCP. Through the CCP Central Committee’s International Liaison Department (Zhonggong zhongyang duiwai lianluobu 中共中央對外聯絡部), the MCP received advice and training and communicated to it the Party’s policies and stances on issues of importance to the CCP. While the full contents of these communications remain classified, the MCP’s public statements were conveyed to the CCP’s official organ, the People’s Daily.

One of the central challenges of studying the MCP is a dearth of primary source materials on the Party, ranging from internal communications and directives to public statements. This book, currently composed in Chinese and to be translated into English at a later date, compiles in one volume articles and editorials from the People’s Daily that cover the MCP, including resolutions by the MCP Central Committee and its various statements on politics in Malay(si)a, China, the socialist world, and geopolitics more generally. The book also includes CCP Central Committee statements concerning the MCP, as well as articles and editorials on the MCP and its revolution authored by CCP foreign policy specialists and the People’s Liberation Army.

This book makes a number of important contributions to the study of the MCP. First, it provides a large amount of primary source material heretofore not systematically collected in one place. In so doing, it provides important insight into the MCP’s policies (especially those after the promulgation of its “New Policy” (xin fangzhen 新方針) in 1962), the influence of the Cultural Revolution on the MCP’s policies and rhetoric, and a record of the rhetorical output of what became the MCP’s Central Committee Faction (zhongyang pai 中央派) after the MCP’s split in the early 1970s. Second, the book provides a record of the MCP’s interactions with and impressions of other communist parties and major geopolitical events. Third, it shows how the CCP viewed the MCP, both as a foreign communist party engaged in a revolution in its homeland and where the MCP stood in the broader Sino-Soviet split. Utilized with other primary and secondary sources, the book also stands to contribute to the understanding of Cultural Revolution-era foreign policy and the experience of foreign communists and communist parties in China.

“The Logic of Insurgent Legal Systems”

“Politics is Not Always Local: Master and Local Cleavage Congruence in Civil War”

“Black Box in the Fog: The History of the Malayan Communist Party” (with Jason Sze-Chieh Ng)